In Praise of Theatre is the result of a public conversation which took place between Alain Badiou and Nicolas Truong at the Festival d’Avignon in the summer of 2012 as a part of the “theatre of ideas” series. The short book follows the meandering rhythm of an informal interview rather than a philosophical treatise and readers who are familiar with Badiou by way of his large and occasionally difficult tomes like Being and Event and Logics of Worlds will find this 87 page work exceptionably approachable.

Taken alongside his previous philosophical works Rhapsody for the Theatre and Handbook of Inaesthetics and his own efforts as a playwright The Incident at Antioch and Ahmed the Philosopher, In Praise of Theatre signals, if nothing else, the importance of theatre for Badiou’s thinking.

And, as one might guess from the title, Badiou makes a number of triumphant proclamations about theatre, calling it “the most complete of the arts” and referring to it as a compass without which it is impossible to navigate one’s way in the world. If it were not for the irresistible pull of mathematics and logical argumentation, he confesses, he would have tried to make a career for himself as a playwright and actor.

This praise, suggests Badiou in typically dramatic fashion, is crucial given that theatre is under attack! In the first chapter, “Defense of an Endangered Art,” he discusses the diabolical threats posed from both the right and the left. The right wing attack on theatre threatens to reduce it to a consumer driven form of entertainment which must constantly compete with the likes of cinema, television, and the remarkable convenience of services like Netflix and Hulu, which offer endless entertainment no further away than the phone in your pocket.

This leads to a well-established theatre, but one that either rehashes the “classics” in modern garb for grade school field trips or seeks something like a lowest common denominator form of entertainment that can both appeal to a wide audience and turn a sizeable profit. The real danger here, says Badiou, is that theatre does little more than “reinforce the opinions of the spectators, which are predictably enough the dominant opinions.”

A trend which is on display nowhere better than the highly acclaimed recent Broadway musical “Hamilton,” an overtly romanticized retelling of how one of the founding fathers heroically built the United States into a great nation that repaints a well-documented slave trader as a figure of liberation.

That is not, however, to suggest that theatre should not be accessible to the masses. Badiou insists that theatre can be a site of liberation and that “one should deploy a militant figure of the theatre: based on the idea that theatrical action is addressed to everyone (just as emancipatory politics must be),” and yet one must also insist on a distinction between theatre which falls under the domain of art: “the invention of new forms adequate to a distance taken from that which dominates,” and theatre as entertainment, “which is a constitutive piece of the dominant propaganda.”

The threat to theatre from the left is the notion that theatre itself has outlived its usefulness and must be totally deconstructed from within. As Badiou says, this is the “idea that the theatre must abolish representation and become a monstration.” This is not to say that theatre ought not to be a place of experimentation or even deconstruction. 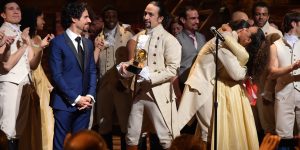 not leave anything like an established theatre behind which can be a force for emancipation. One could say, in Badiouian parlance, that where the right wants to obscure theatre’s emancipatory possibilities, the left’s reactionary tendencies run the risk of abolishing those possibilities altogether.

In the second chapter, Badiou likens the historical relationship between theatre and philosophy, starting with the Greeks, to a relationship between a very old couple. Despite their contentions, dating back to Plato’s mistrust for the stage, theatre and philosophy ask the same question: “how to speak to people in such a way that they think their lives otherwise than they usually do?”

In stark contrast to the first chapter in which the theatre must be defended from her attackers who are on the verge of destroying her, in this chapter theatre is the “greatest machine ever invented for absorbing contradictions.” When a philosopher, for example, attacks theatre, Badiou says, they are actually legitimizing one expression of theatre over and against another. Thus the reader is left with two oppositional visions of theatre and little in the way of a means for synthesizing them.

In the third, and perhaps the most interesting chapter, Badiou discusses the relationship between dance, cinema, and theatre. He marks out an old philosophical distinction with dance on the side of bodies and immanence and cinema on the side of images and transcendence. In dance bodies move spontaneously and freely, where as in cinema the images on the screen or in a certain sense fixed and unchanging. No matter how many times you watch the same movie, it will always turn out the same. Whereas dance “tries to show what a body is capable of,” cinema appears as an external imposition on a passive spectator or even no spectator at all.

True theatre, on the other hand, must negotiate these differences and find its space in between them. It is a mixture of the bodily immanence of dance and the spectacular transcendence of the image – negotiating between a fixed script and spontaneous improvisation of any given performance. Insofar as it performs this risky negation well the result can be sublime, which is why Badiou calls theatre “the most complete of the arts.”

In the fourth chapter, Badiou briefly discusses the tenuous relationship between theatre and politics. Politics is perhaps the best source of material for good theatre, aside from love, but theatre itself can never be reduced to politics. For Badiou theatre operates in its own register and, at its best, produces artistic truths, as opposed to political truths.

Nonetheless, the two cannot be neatly separated, which is why it is common to speak of a national theatre but not, for example, a national cinema. This chapter is by far the most disappointing of the book – at only seven pages it offers little more depth than what is covered here in this review and leaves the reader waiting for more.

In the final chapter, Badiou responds to a few of Truong’s questions on what amounts to the nuts and bolts of theatre: the actors, the spectator, the setting, different genres, and even the intermission which Badiou, with a surprising passion, defends. The intermission, he says, points to the impurity of theatre – it is a symbol if its precariousness, which is what gives theatre its transformative potential. 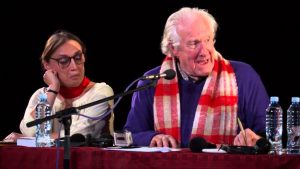 It also gives the spectator and opportunity to slip out, should the performance be bad. As Badiou says, “When the theatre fails, it’s terrible… It’s as unbearable when it fails as it is extraordinary when it succeeds.” And yet when it succeeds, it can be, as he says, miraculous.

While readers familiar with Badiou will find this short work refreshingly accessible and light-hearted compared too much of his previous work those unfamiliar will not find here anything like a helpful introduction to his overall philosophical project.

Nonetheless the conversational format offers an unusual glimpse at the personality and quirks of this renowned thinker. Lovers of theatre, in all of its various expressions, will also find here a novel and insightful, albeit brief framework for reflecting critically on the state of theatre as a whole and on particular works and performances.

Ryne Beddard is a graduate student in religious studies at the University of Denver.  He is the author of “Lycantheopolitical: The Sovereign and the Werewolf, or Christ and Sirius Black”, Resonance (May 2016).

Inventing Afterlives: The Stories We Tell Ourselves About Life After Death. Janes, Regina M. New York, NY: Columbia University Press, 2018. 384 pages. ISBN: 9780231185714. Why do we form beliefs about the afterlife? What cultural work do these beliefs perform? In her beautifully written, learned book, Inventing Afterlives, Regina Janes proposes answers to these questions. […]