Claire Colebrook calls Alain Badiou’s newest book Black: The Brilliance Of A Non-Color, a “singular and remarkable book.” My initial reaction was similar, though I have always been impressed by Badiou’s eloquence and prose. What struck me is that I never would have associated the text with Badiou were it not for his name on the front cover. The specter of Badiou is most noticeable if this work is read in tandem with In Praise of Theatre, since the first of four sections is composed of a multi-narrative style mise en scene, laying the groundwork for the philosophical meditations of the color black in music, painting, politics, sex, anthropology, and more. The observational nature of Badiou’s writing, and the smooth transitions from the empirical to the critical are a far cry from the Badiou of set theory and political militancy. Nor is this the Badiou that writes with Nicolas Truong, answering questions with a lighthearted rhythm. In fact, the single most remarkable element of this book is that the only theme binding the 80 pages is the constellation of relationships associated with the color black.

After the translator’s admission, in her introduction, of the ambiguity of noir or le noir as black and/or darkness, the first vignette harks back to Badiou’s time in the military. His compatriots sing a song called, Black is black, there is no hope anymore. The song acted to keep the powers of evil away, “since singing of black despair is some consolation for having to endure it.” (5). This appropriation of consolation in darkness extends its motif even to the end of the text, as Badiou points to negritude, or the positive assertion of blackness, as captured in the image of the black panther. As an animal of beauty, ferocity, and grace, the black panther is a creature of superiority, and thus “black, a stigmatizing category internal to white domination, is reappropriated by its victims as the banner of their revolt” (99). Most of the illustrations contain this dialectical pattern, and make black inconceivable as representative of any single object or cause in particular.

In addition to the co-optation of black as a symbol to represent the other side of the dialectic, the brilliance of the non-color lies also in the ability to exhibit mystery in what is prohibited. In the second mise en scene, Badiou recalls a game he played at eight years of age called The Stroke of Midnight. The optimal way to play was with six people, preferably of both sexes, in total darkness and in the absence of parental authority. Darkness, in this vignette, sets the scene, or rather the non-scene, of prepubescent sensuality and desire heightened by what is normally taboo. In the game, “the dark connotated jouissance,” and much like the infamous cloaking mechanism of Las Vegas for adults, darkness is the scene that seizes the time of the impermissible, so afterward, “nothing had taken place except for the dark of the unseen place” (11).

After several more childhood anecdotes, Badiou confronts black as a non-color, and as the opposition of white, which is the sum of all colors. He concludes that black does not negate light, or white, but is passive by simply being absent. Though white and black are diametrically opposed, both express a sense in which “the real fails to be attained. What is missing from both snow and night is the rainbow” (35). Badiou invokes his experience of blackness as the negation of purity, while whiteness corresponds to the ignorance and innocence of virginity. Pierre Soulages invokes black in its infinite disparities, suggests Badiou by simply allowing light to play with monochromatic art. how complete essence is marked by incompleteness. And black is invoked in the flags of the reactionary anarchist, whose shift from subversion to revolution will change the flag’s color to blood red. Badiou excellently weaves together the symbolic orders of black in pseudo-narratives to demonstrate just how black returns in and through a desire that white constantly wants to negate. 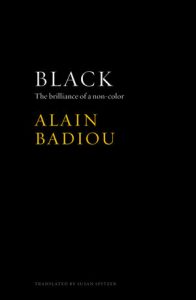 The last section, called Physics, biology, and anthropology, moves from the theatrical and descriptive plots of childhood to the physics of black holes and dark matter. When a star dies, the collapse results in an inconceivable density. Everything that comes near to it becomes part of it and “a dead star lies at the border between nothingness and super-reality” (77). A black hole, and subsequently the connotation of the word black in this fascinating cosmological phenomenon, symbolizes “both lack and excess.” The paradigmatic dialectic of black can be found in the far reaches of space. But blackness, or darkness rather, can also explain gaps in knowledge. Though scientists understand the physics of movement in the galaxies, dark matter “designates what is lacking in perception so that nothing should be lacking in thought” (78). And it is principles such as this that pervade the necessity in language to make what is indiscernible part of a discursive modality. Even in modern scientific principles, the language of darkness represents a knowledge not yet illuminated.

As Badiou moves from the cosmos to the divisibility of black in plants and finally to the question of race, the question of black as the symbol of what is imperceptible and hidden is situated in the background. The “white” man’s invention of “black” people as an inferior race leads to no dialectic, but “a false “objective” base for oppressive classifications, dubious symbolic calculations, disparaging judgements, or shameful displays of self-satisfaction” (104). In short, the infinite gradations of skin tone throughout the human race make any collective assessment of color both preposterous and downright dangerous. And while justice requires a retroactive struggle against systemic preference of “whiteness,” an end to deliberation based on skin color must symbolically and objectively be an end. Badiou affirms that in infinite coloration, humanity is in fact, colorless.

To call this a singular and remarkable book is justified, since Badiou eloquently intertwines 21 different vignettes and discursive meditations, all remarkably different, yet bound up by the singular theme of black. In the constellation of examples and investigations, Badiou goes beyond the ontological question of what black is, and probes rather what black can do.

Mason Davis is a graduate student at the University of Denver, pursuing a degree in Religious Studies. His research interests include critical theory, aesthetics, and phenomenology.

Daniel Whistler, Schelling’s Theory of Symbolic Language: Forming the System of Identity (Oxford, UK: Oxford University Press, 2013), 261 ppgs + xi Friedrich Wilhelm Joseph Schelling (1775-1854) was a German philosopher who is situated between the two predominant thinkers of his time: his mentor, Johann Gottlieb Fichte; and his contemporary and in many ways, rival, […]

Inventing Afterlives: The Stories We Tell Ourselves About Life After Death. Janes, Regina M. New York, NY: Columbia University Press, 2018. 384 pages. ISBN: 9780231185714. Why do we form beliefs about the afterlife? What cultural work do these beliefs perform? In her beautifully written, learned book, Inventing Afterlives, Regina Janes proposes answers to these questions. […]

Ciccariello-Maher, George. Decolonizing Dialectics. Durham NC: Duke University Press, 2017.  256 pages.  ISBN-10: 0822362430.  Hardcover, paperback, e-book. “Truly to escape Hegel,” Michele Foucault warns, “involves an exact appreciation of the price we have to pay to detach ourselves from him.” Considering that price, George Ciccariello-Maher has decided that Hegel’s methodological legacy –– the dynamic movement of conflictive […]