In Totality and Infinity, Emmanuel Levinas famously observed that “Dasein in Heidegger is never hungry.” Levinas did not mean to make a brute materialist point, e.g. that Heidegger failed to recognize the banal, everyday experience of biological feelings like being hungry. Rather, Levinas suggests Heidegger failed to recognize that our world is full of objects of enjoyment. Today, increasingly immersed in digital media, one might playfully amend Levinas’s observation to say something more: “Dasein in Heidegger is never online.”

Phenomenological anxieties about technology might lead one to bristle at the insinuation that digital mediation is somehow as constitutive for human beings, certainly for Dasein, as being hungry. It is exactly this assumption, however, that Ontic Flows: From Digital Humanities to Posthumanities aims to dislodge.

The volume, edited by Matt Bernico and Manuela Kölke, collects fourteen interventions into the ongoing conversation about what digital scholarship and digital media have to do with humans and the humanities. Though at first blush the table of contents might seem like a jumble of disconnected theses, the essays perform the kind of interdisciplinary, collaborative approach that gets examined from a variety of angles in the essays, aptly summarized and unified by the editors in the introduction to the volume.

Under the heading “Reflections on Digital Culture,” we encounter three opening essays, each examining how digital media changes our relationship to ourselves and our social lives. To borrow a phrase from Marshall McLuhan, these essays set the stage for a digital ecology, letting readers get a handle on the contours of an ecosystem that is becoming more and more invisible as it becomes less and less novel.

Authors Ashley Ellis and Spencer Compton offer helpful articulations of the digital ramifications for individual identity and relationships; that both essays are also situated in some uncannily familiar phenomenological terms (dealing with problems of memory, time, and, in Compton’s case, explicitly with Heidegger and Levinas) makes them especially useful. The third essay, by Daryman Kiliman, also takes up anthropological themes, but through a careful look at Electronic Dance Music, exhibiting the need for media analyses to look directly at media.

The following section heading, “Transforming Digital Research & Pedagogy,” signals a transition to a cluster of essays that 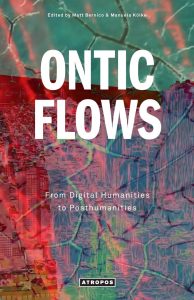 each experiment with the educational possibilities opened up by digital media. These essays are anything but rote application, however. John Brittingham, for example, plays the part of a digital Pierre Hadot, imagining how the use of certain technologies do or do not fundamentally transform and disrupt a philosophical way of life, while Jonathan Heaps attempts to think through scholarly method using the tools of theological polymath Bernard Lonergan and psychologist Jean Piaget.

Frederick W. Gibbs, in an essay called “The Poetics of Digital Scholarship,” looks at the challenges digital media poses for academic habits developed in and for a print ecology, including citation conventions and critical review (the somewhat amphibious space of Religious Theory, situated between a peer-reviewed journal and a blog, is in fact an interesting test case for some of Gibbs’ ideas). These themes are picked up again by John Monroe, who considers the complexities of Wikipedia, not simply rehearsing the stereotype of Wikipedia as a problem for citation and research one encounters with young or lazy scholars, but rather as a platform that presents knowledge, that is, acts as a pedagogue, in unique ways.

Finally, utilizing a largely Deleuzean toolset with help from New Materialism, Shannon Stevens and Richard Wainwright propose a project of “[Onto]Riffology,” aiming to articulate the new forms of pedagogical assemblages made possible by e-mails, rapid text editing, and other creative strategies unique to digital media.

The last section, “From Digital Humanities to Posthumanities,” rounds out the collection with a series of challenges for humans, humanism, and the humanities. Ellen Moll enumerates “The Seven (Possibly) Deadly Sins of Making the Humanities More Like Science,” making pointed suggestions like refusing to assume digital sciences are neutral tools and rejecting the idea of a technical universalism that occludes identities like race or ability.

The remaining essays each, in their own way, take on the difficult task of imagining the humanities without, after, or with what-is-other-than the human. Devin Higgins probes the computerization of scholarship and human life, challenging the binary between human and non-human with respect to the meanings generated by machines, and Nicholas Houde likewise faces the unsettling possibilities of the fate of humans in a world increasingly managed by that which is not human, a situation that could bring the violent chickens of some massive attempts at human management (like colonialism) home to roost.

Bernico and Kölke, the volume’s editors, complete the book with two examinations of posthumanism and the humanities. Bernico puts forward a novel thesis, derived from bygone Russian philosopher Nicolas Berdyaev, about the need for a “speculative anthropodicy,” an articulation of the human being as an actor among other actors. This problem is indirectly taken up again by Kölke, who provides a helpful taxonomy of posthumanisms in order to suggest a variety of ethical problems foisted on the field of humanities by the emergence of digital technologies.

With such a range of contributions, Ontic Flows offers a welcome constellation of diverse approaches for thinking through not just the consequences, but also the possibilities of and for digital technologies as they relate to humans and the humanities alike. Perhaps the most useful thread in the text is a desire to avoid the pitfalls of both a naive technological optimism, whereby digital technologies would save the humanities from irrelevance and catch the field “up to speed,” and a naive technological pessimism, whereby digital technologies are rejected outright as somehow insidious by virtue of destabilizing traditional modes of being and thinking in the world. There is not, however, an all-too-easy “third way” approach put forward instead; rather, the authors all, in their own way, assume the situation of digital media and try to articulate the peril and promise therein.

The digital clock will not be reset, and, if we are honest with ourselves, very few of us would actually want to be rid of the accouterments of digital technologies anyway—certainly no one reading this review, hosted online, at a para-academic blog accessible through algorithms and publicized via social networks. These days, it is not enough to say that Dasein does in fact get hungry. Dasein also plugs in, voluntarily or not, encoded in algorithms and mapped by Google, with or without a Facebook page.

Alongside a right suspicion of digital technologies, it is worth exploring the ways in which digital technologies might in fact also be objects of enjoyment. What more could we want from scholarly interventions into this new territory than a curation of suggestions and experiments that include voices from theologians, music critics, and philosophers, as well as citations from Wikipedia, blog posts, and, yes, even books?

Dean Dettloff is a PhD candidate at the Institute for Christian Studies, where he works on the intersections of media theory, religious studies, and critical theory. His doctoral work explores the ways in which philosophy of design and technology, as expressed by Régis Debray, Paul Virilio, Vilém Flusser, and Peter Sloterdijk in particular, illuminate “religious” phenomena and practice in a way that might contribute to more liberating expressions of spiritual traditions foreclosed both by static dogmatism and the impositions of political secularism.

The just-released, multi-volume Norton Anthology of World Religions is a major project of substance undertaken by a group of world-renowned scholars in comparative religions.   However, what makes it stand out is the contribution of Professor Kancha Ilaiah, who hails from an illiterate sudra shepherd family. In the four-level Hindu caste system the sudra are the […]

Laycock, Joseph P.  Dangerous Games: What the Moral Panic over Role-Playing Games Says about Play, Religion, and Imagined Worlds. Berkeley CA: University of California Press, 2015.  ISBN-10: 0520284925.  Hardback, paperback, e-book.  368 pp. Anyone growing up in the 1980s or any parent of adolescents during this decade knows more about the game Dungeons and Dragons […]

Osto, Douglas. Altered States: Buddhism and Psychedelic Spirituality in America. New York: Columbia University Press, 2016. ISNB 10: 0231177305 Hardcover, e-book. 328 pages. In recent years, the amount of published scholarly work on psychedelics, religion, and spirituality has grown enormously. Even so, many writers still feel it necessary to do a rhetorical dance around the […]