For several decades there has been a general consensus among readers of Gilles Deleuze: the influential French philosopher was, is, and will be a thinker of affirmation, joy, and plenitude. Notwithstanding the fact that Deleuze himself insisted on this very profile, a certain alternative current has arisen in recent scholarship on Deleuze. There has developed—to the dismay, one supposes, of Deleuze’s orthodox readers—a vision of the infamous philosopher of difference and desire that directly antagonizes the beatitudes of affirmative politics, ontologies of plenitude, and the ‘canon of joy’ associated with Deleuze: a darker, destructive and more macabre Deleuze.

To pick a few examples just from 2016: Aaron Schuster’s The Trouble With Pleasure explores the thorny relationship of Deleuze and psychoanalysis, particularly the rift between Deleuze and Lacan, with an explicit view toward a more negative Deleuze by raising the negativity of the complaint to an ontological register. Daniel Colucciello Barber’s article, entitled, “The Creation of Non-Being,” published in Rhizomes 29, finds in the late Deleuze a partisan of non-communication, negativity and destruction, and decisively links these admittedly occulted Deleuzian proclivities to the afro-pessimist project.

Finally, Andrew Culp’s Dark Deleuze—the subject of this review—is a sort of manifesto for the ‘negative reading’ of Deleuze, and makes up in intensity and polemic what it lacks in length and breadth. My aim here is not only to summarize the contents of this small, dense volume, but also to attempt to place it in the context of contemporary political struggles, to which Deleuze is perhaps more important than ever.

In order to characterize the aim of Dark Deleuze, one should perhaps quote the author on his own intentions, and the oppositions he wishes to establish: Culp puts forth a Deleuze characterized not by naïve affirmation, but rather by “revolutionary negativity in a world characterized by compulsory happiness, decentralized control, and overexposure” (2). In other words, and true to Deleuzian method, Culp wishes to render Deleuze a problem for thought—to understand the “rapport between Deleuze’s thought and our time” as a “puzzle for us to solve,” rather than a mere tradition to replicate or embellish (4).

The guiding motif of Dark Deleuze is nothing other than a hatred for, and desire to destroy, the world as such. Culp imagines a “Death of the World” that follows on the death of God and the death of Man, completing the three-fold project of revolutionary negativity, with a view towards the abolition of the state and the advent of full communism. Much of the legwork Culp performs in Dark Deleuze is split between his (non-)apologies to orthodox Deleuzians with regards to his heterodox reading of a Deleuzian negativity, and the “series of contraries” he lays out in rapid succession—more akin to footnotes to Deleuze rather than fully-fledged concepts—which are aimed at articulating and intensifying a hatred for the world, and calling for its destruction.

No doubt, many readers of Dark Deleuze are Deleuzians themselves, and so the talk of the death of the world will appear as less of a shock and more of an index of an internecine debate. An infamous Deleuzianism reads as follows: “We need reasons to believe in this world” (Cinema 2: The Time-Image,” 172). Against the realist reading of Deleuze, where ‘belief in the world’ is meant to signify the need for a re-connection to the world as it is, Culp reads through and past Deleuze, such that one should only believe in the world inasmuch as one desires grounds to destroy it—the ‘world’ must be understood not only as a mass, social hallucination, but as a transcendental illusion.

Seasoned readers of Deleuze will recognize, in each of these contraries (or “nondialectical negations,” as Culp describes them), concepts that have caused no small consternation for Deleuze scholarship. The dangers of reading Deleuze tend to often coincide with the boons of reading Deleuze. Since Deleuze’s thought is rarely systematic and almost always an intervention into one debate or another, he often appears to hesitate between seemingly opposed concepts, such as cut and fold, interruption and flow, univocity and equivocity, and so on.

Decisively, Culp sees this not as a weakness in Deleuze’s thought, but one of its great strengths—namely, the ability to adapt, strategize and act in thought. Thought becomes a life, irreducible to life in general or even to “bare life.”[1] In other words: thought becomes, or is in itself, politics. Hence the wisdom of his admonishment at the outset of the text: “there is something absolutely essential in [Deleuze’s] work, but it would be best not to take it at face value” (4). Deleuzians at large would do well to take heed of this advice.

I won’t waste the reader’s time cataloging my agreements and disagreements with each of Culp’s contraries—they deserve to be rigorously evaluated one by one—but it is clear that Culp has done his homework, and that his heterodoxy is genuine. Of note are the critiques of procedural democracy (41-43), the searing takedown of Nick Land’s accelerationist project (44-48), and the pervasive emphasis on the powers of the outside (56-59). The section on the subject and the genesis of subjectivity from shame, misery and disgust as much as wonder and freedom, is exemplary of the possibility of a radical politics that dispenses with guilt and innocence as primary categories, ensconced as these latter are in a Christian-capitalist libidinal economy (26-29). 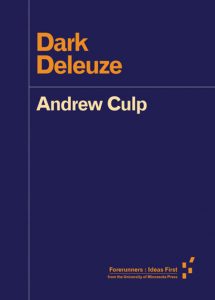 As a volume, Dark Deleuze has many weaknesses, some of which Culp ably addresses in a concluding prolepsis: the book is too short, the arguments move much too quickly, the author ignores Deleuze’s own prescriptions, and so on and so forth. So be it, Culp seems to say, with a malevolent grin (65). In spite of the perversity and carelessness perceived in Dark Deleuze by the partisans of joy, Culp insists that in order to be faithful to Deleuze one must, in a very specific sense endorsed by Deleuze himself, betray the master. Dark Deleuze is Culp’s philosophical and political ‘buggery’ of Deleuze, a desperate attempt to escape a desperate situation, in which Deleuze does indeed, or has indeed, become the “ideologist of late capitalism.”[2]

At the end of the day, Dark Deleuze is an important contribution to Deleuze scholarship—and to radical political thought. The ‘negative’ turn toward a ‘sad Deleuze’ is, against the partisans of the ‘canon of joy,’ perhaps perfectly untimely, and the call for a conspiratorial communism characterized by a renewed political struggle that resolutely jettisons liberal platitudes about connectivity and tolerance is a welcome alternative to the banality of what currently passes for ‘resistance’ to capitalism. Culp is absolutely correct to leave behind the naïve, joyous Deleuze of rhizomatic connections and networks of flows of desire (all of which was radical in the 1970s, but, alas, no longer) and to affirm instead the destructive darkness at the heart of Deleuze’s philosophical project, folded into so many of the prefixes of key Deleuzian terms, de-, a-, in, and non-.

Nevertheless, the book’s most obvious—and damning—flaw is the omission of any reference to afro-pessimism, the assorted authors of which have been advocating the death, or the end, of the world—using precisely this language and reliance on negativity—for approximately a decade.[3] I note in passing that Culp, judging from his fascinating discussion of Dark Deleuze here with Alexander Galloway, is well-aware of the afro-pessimists. Suffice it to say that the omission of such important source material from the monograph is troubling, not to mention familiar. In the last instance, Dark Deleuze remains white—all too white.

Of interest both to Deleuzian scholars and to all those involved in thinking and enacting a world beyond capitalism, Dark Deleuze invites us to consider the possibility that one will neither attain nor create such a world without destroying the present world. That this destruction of the world remains an essentially symbolic and semiotic destruction (that is to say, it appears to still be governed by a logic of whiteness, which tends to preserve itself by effacing itself) should give us pause. Culp may very well be a decisive voice for the future of radical politics—a handyman of our ‘resistance to the present’—but the buggery of Deleuze has, so to speak, only just begun.

Timothy Snediker is a doctoral student in Religious Studies at the University of California Santa Barbara. He tweets at @tsned.

[3] See, for instance, Jared Sexton, “The Social Life of Social Death: On Afro-Pessimism and Black Optimism.” InTensions 5.0 (2011); and, in particular, Frank B. Wilderson III, “We are trying to destroy the world”: Anti-Blackness & Police Violence After Ferguson,” https://illwilleditions.noblogs.org/files/2015/09/Wilderson-We-Are-Trying-to-Destroy-the-World-READ.pdf And note that the rhetoric, to say nothing of the lexicon, of the end of the world dates back to Frantz Fanon—another black thinker who goes un-cited in Culp’s text.

Review – Badiou and Gauchet on Capitalism and Democracy

Badiou, Alain and Gauchet, Marcel.   What Is To Be Done?: A Dialogue on Communism, Capitalism, and the Future of Democracy. Translated by Susan Spitzer.  Cambridge, UK: Polity Press, 2016.  ISBN: 1509501703.  Hardback, paperback, e-book, 168 pages. Alain Badiou and Marcel Gauchet’s transcripted dialogue, What Is To Be Done?, could not have come at a more […]

Welborn, Larry L. Paul’s Summons to Messianic Life: Political Theology and the Coming Awakening (Insurrections: Critical Studies in Religion, Politics, and Culture). New York: Columbia University Press, 2015. ISBN 9780231171311. Hardcover, paperback, e-book. 154 pages. With the unprecedented amount of political upheaval throughout the west since the turn of the century, especially after the supposed […]