The best interpretations of Spinoza’s philosophy would lead us to believe that, for Spinoza, religion is superstition. Henry Allison’s account is an excellent example.1 As he proceeds to discuss Spinoza’s views concerning revelation, scripture and religion, the subject matter of the Tractatus Theologico-Politicus, Allison writes:

Spinoza’s general attitude to the claims of revealed religion is already clear from our consideration of the Ethics. Basically, belief in the teachings of traditional religions, as generally construed, is equated with superstition. The source of such belief is the imagination, and its hold on the mind of the masses is explained in terms of its connection with the passions of hope and fear. Hence, not only does Spinoza maintain that this belief lacks any rational basis; he also holds that the “virtues” which its proponents affirm-for example, fear of God, a sense of guilt, repentance, humility, and so on-are largely at variance with the dictates of reason.2

This equation of religion with superstition is perhaps hasty. It is in the “Appendix to Part One” of the Ethics that Spinoza expounds on the nature, origin and consequence of an intellectual prejudice, the necessity of which is grounded in human nature. This prejudice is said to include a set of interelated ideas that constitutes what would normally be called religious belief. As expounded in the Ethics, Spinoza’s theory of religion might be considered merely an argument that “religion is a form of anthropomorphism.”3

Surveys of modern theories of religion either ignore Spinoza or misrepresent him. When his contribution is noted, we are told about his philosophical discreditng of classical theistic beliefs, which he sees as a form of intellectual prejudice, and of his establishment of a method of biblical criticism, which is celebrated as an heroic public attempt to discredit the authority of the bible.

It is not surprising that Spinoza’s naturalistic account of religion as a social institution of (probably) indeterminable value is totally occluded by those beacons of secular Enlightenment. His account credits religion with making possible the overcoming of the horrors of tyranny and, illiberally (classically elitist yet modernly pluralist), founds democratic government on a necessary diversity of religious sensibilities, blames insufficient sectarianism for religious violence, defends democratic government as asymptotic to reason (without assuming rationality of participants) and requires it to exercise limited supervision over religion in the state).4

In a notable exception to the general silence, Roberto Cipriani begins his historical introduction to the

sociology of religion with the suggestive observation that the scientific study of religion is indebted to “Spinozism, that is, to the need to free religious studies from fideistic and ideological claims.”5

Unfortunately, Cipriani sees it only as a contribution to biblical hermeneutics and ignores the naturalistic theory of religion Spinoza articulated in the Tractatus Theologico-Politicus. Noting Spinoza’s avant-garde position, Cipriani observes that “Spinoza’s historical-critical method was directly linked to political questions designed to achieve a freer society, which would be open to new solutions, including a secular approach to religion.” As in other surveys there is no recognition of Spinoza’s own sociology of religion.6

All strands of the Tractatus Theologico-Politicus argument converge on chapter 14, where faith is defined as the subjective state (of belief and passion) that leads a person to piety, in matters of justice and charity, as judged solely according to that person’s behavior.7  It is the task of chapters devoted to biblical hermeneutics (7-13) to establish that exhortation to piety, in obedience to the requirements of justice and charity, is the essential teaching of the bible,8 on which, alone, the bible is everywhere consistent and, by virtue of this consistency, exhortation to piety constitutes the “word of God” of which we can be certain that it has reached us uncorrupted.9

Earlier chapters (1-6), devoted to prophecy and miracles, ground religious authority in the ability to motivate ordinary people to act piously.10 This definition of faith aligns Spinoza’s ideas with what would become known as a Durkheimean functionalist approach to religion that can be extended to include aspects of Berger’s sociology–of–knowledge view of religion as “sacred canopy.”11

According to Spinoza, religion is stabilized superstition. This claim and all other elements of Spinoza’s theory of religion are present in the preface to the Tractatus, albeit cryptically at times. Rather than equating (philosophically or scientifically unfounded) religious belief with superstition, Spinoza sees religion as practically necessary to the solution of the problem of superstition.12 Understanding magical behavior in quasi-Malinowskian manner—as occurring at the limits of people’s power over circumstances and of their knowledge of the forces the effect them13 — Spinoza locates its origin in fear that is caused by convergence of the weakness and ignorance in which the lives of all humans begins.

The problem of superstition is not falsity of beliefs as such but their instability.14  So long as we adhere to practices merely on the basis of their fleeting ability to overcome fear by inducing hope, which ability is grounded merely in the fact that the proposed course of action has not been tried before, we move from one promise to another, never laying the foundation for a body of accumulated experience that may constitute a starting point of knowledge. One result is that “the multitude remains ever at the same level of wretchedness” and their culture fails to advance.

Working on the level of emotion and imagination, the drama of ritual increases the power of any given superstition to alleviate fear and instill hope and shifts the ground of its efficacy, from the transient promise of the novelty of that which has not yet failed and caused despair, to the persuasiveness and authority of religion. The stability of ritual attenuates the problem of superstition, limits the credulity of the fearful ignorant and, thereby, creates a foundation for both political and cultural stability. These, in turn, make possible the advancement of knowledge and the exercise of reason, which, alone, solves the problem.

The two products of religion, born of the stabilization of superstition, are inversely related: the more enlightened a society, the less despotic its regime. The specific equilibrium a given society achieves between reason and superstition determines the proper role of religion in its affairs. Most fundamental, for Spinoza, is the enduring relation between religion and people’s perception of liberty.

Tyranny, the regime that most heavily relies on ignorance and in which people are the least free, is also the most unstable. A state of informers and secret police, trapped in mutual suspicion and fear, serially deposes its domineering dangerous rulers, unless their rule is sanctified by religion. In Tyranny, domination of all thought by religion 16  is both necessary and efficient as it induces subjects to police themselves, in a delusion of freedom, as a supreme virtue of piety, for the sake of salvation.17

The comforts that religion brings to tyranny—to both tyrant and subjects—are, however, themselves inherently unstable. As religion addresses our passions to motivate us to act as our society expects or requires, it collides with a feature of human nature that Spinoza’s naturalistic realism emphasizes: human beings are united by reason and divided by passions.18 Accordingly, by the nature of things, religion must be pluralistic enough to accommodate a wide range of divergent sensibilities and can aspire to uniformity only at a high level of abstract principles, not in specific implementation.19

Tyrannical mind control, which religion makes possible, is bound to cause profound hatred and to result in the ennobled sedition of the martyr because the stories and ceremonies that inspire some people’s piety may arouse contempt in others who are edified by beliefs and practices of a different kind. 20 Suppression of variants of “true religion”21 inspires the fearless rebellion of the righteous, which must be assiduously avoided.22 Accordingly, in direct opposition to Hobbes, Spinoza holds that insufficient sectarianism is a major cause of civil strife.

The only way out of this morass is to advance toward granting people freedom of judgment in matters of religion23
— within the bounds set by the civil religion.24  Spinoza’s doctrine of the freedom of religion recommends a limited freedom that requires state supervision.25  State supervision is required for reasons of: 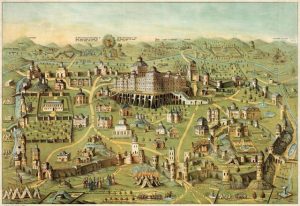 Underlying all four reasons is a quest for the cultural and political unity that reason could provide had it been possible for a multitude of people to live according to reason. According to Spinoza, only an exceptional level of understanding—beyond mere scientific knowledge—can be motivationally effective in overcoming harmful divisive desires. Such understanding is all too rare to be politically significant. Consequently, even the well being of an advanced society depends the piety that religion induces by appealing to imagination and emotion.

Nevertheless, Spinoza claims that an approximation of the council of reason can be achieved in the political domain through non rational means. Such approximation is the virtue of large democratic legislative assemblies wherein “horse-trading” among agents motivated by diverse desires aims to secure a reliable majority. Diverse irrationalities and narrowly conceived self interests cancel each other out as they vie for wider and wider ad hoc agreement. The more comprehensive the coalition, the greater its approximation to what reason would have counseled.29

In a democracy, therefore, state supervision of religion is akin to sovereignty of reason over passion. The smaller the body in which sovereignty is vested, the less efficient the hidden-hand mechanism that protects it from folly. Nevertheless, Spinoza goes so far as to claim that oversight of religion by most forms of government is better than no oversight because governments are driven by interests of self preservation to act reasonably in pursuit of the public good.30

A theory of religion such as this should clearly have prevented Spinoza from discrediting the authority of the bible and there is no reason to think that it did not. The purpose of his critical study of the bible was not only to legitimize freedom of thought but also to protect the moral authority of the bible from unwise, shortsighted and irresponsible intellectual criticism.

Ehud Benor is Associate Professor of Religion at Dartmouth College.   He is the author of Worship of the Heart: A Study of Maimonides’ Philosophy of Religion (State University of New York Press, 2012).

The Dangers Of Dealing With Derrida – Revisiting the Caputo-Hägglund Debate On The “Religious” Reading Of Deconstruction, Part 3 (Neal DeRoo)

The following is the third installment of a three-part series.  The first one can be found here, the second here.  Revisiting Another Debate But one could embrace another prevalence for deconstruction, what we have here been calling the ‘extra-logical’ factors of deconstruction, its contextualizations, its context. It is precisely this claim that Caputo puts forward—not that the […]

The following is the second part in a two-part installment. The first part can be found here.  II. “Absolute Symbolism” of Christian Worldview: The Aesthetic Dimension The term “absolute symbolism” was introduced into Russian religious philosophy by Alexei Losev to describe the overall quality of Christian aesthetic consciousness. Losev distinguished between three major types of […]

The Mythology of Afterlife Beliefs and Their Impact on Religious Conflict, Part 2 (Brigid Burke)

The following is the second installment of a two-part series. The first installment can be found here. Zoroastrianism Zoroastrianism is believed to be an outgrowth of an Indo-Iranian religious tradition that dates to the 2nd millennium BCE. However, we do not see it mentioned in Greek writings until about the middle of the 5th century […]