Through Vegetal Being is not a book about plants but, rather, an attempt to think with and through them. For some that may seem an odd, even impossible, endeavor. The Western intellectual tradition, as both Marder and Irigaray emphasize, has treated vegetal existence as largely insignificant, and certainly not the type of thing that one can think with or through: plants are passive and inert, and do not manifest any sort of intelligence. Lower than even the non-human animals on the metaphysical totem pole, they are at best mere, but necessary, objects for our use.

Many of these assumptions have long been called into question among researchers, but Through Vegetal Being joins a growing body of philosophical literature intent on rethinking vegetal existence, both in terms of its specific form of being and our relation to it. Many reasons could be given for this turn to plants, but no doubt the most pressing has to do with the environmental catastrophe that global climate change portends. Our careless, profit-driven exploitation of the vegetal world and its byproducts is in large part to blame for current ecological distress and destruction. Understanding the vegetal world differently and interrogating our relationship to it, then, only makes sense, especially if we want to create new ways of being in—and with—the world.

The book takes the form of separate essays by Irigaray and Marder, each of which deals with a common set of themes organized by a prologue, sixteen chapters of around four to six pages each with identical titles, and an epilogue. Given the nature of the book, it would be cumbersome to discuss each chapter individually, but it is worth pointing out that the idea for the book was different than what came to fruition.

In their preface to the book as a whole, Irigaray and Marder point out that they originally hoped the book would “develop from dialogues corresponding to the theme of each chapter” (ix). They quickly deemed that plan “too ambitious or not yet suitable for various reasons,” and settled on the essay format, though they had hoped to present the essays in a more novel fashion, with the “text by Luce and that by Michael presented in upside-down format, with the prospect of meeting in the middle of the volume” (ix). Hence the published version, Irigaray’s essay first, followed by Marder’s.

The book, then, can be read in a few ways. The essays do preserve something of a dialogue, in that the writing of the book involved a back and forth between the two authors, as seen in the individual chapters, each of which end with a composition date. That is, Irigaray and Marder did not compose their respective essays in silos but in response to each other, at least to a certain extent. Because of this, one could fruitfully read a chapter by Irigaray and the corresponding chapter by Marder or even vice versa. Nevertheless, the essays are also self-contained enough to read individually and singularly, and so can be read fruitfully on their own.

I have focused on the organization of the book at length because I think it raises issues regarding the form that thinking about plants can and perhaps should take. Granted that the original intent appears to have been different but did not, for numerous reasons, come to fruition, the present form of the book has the effect of reinforcing at the level of approach a binary logic that vegetal being ultimately undercuts.

As criticisms go, this may seem unfair, given the all-too-human constraints of writing, publishing, and conveying concepts more generally. The problem, however, is that this logic is worked into the text itself. Indeed, central to Irigaray’s essay, which is often poetically beautiful in its own right, is an emphasis on sexuate difference as a means of birthing new ways of being and existing in the world.

Generally speaking, in Irigaray’s oeuvre, sexuate or sexual difference ascribes ontological status to the transcendental difference between the sexes; cultivating this difference in a non-appropriative manner is, for Irigaray, necessary for cultivating new ways of being in the world. In her essay in Through Vegetal Being, this includes how we relate to the non-human, vegetal world. I cannot here get into the interpretative issues surrounding Irigaray’s notion of sexuate difference. Nevertheless, it seems to me that the vegetal world challenges this notion, at least its ontological status. Thinking with and through vegetal being, that is, calls into question the Two of sexuate difference.

Marder himself recognizes this in his essay, when he writes in response to Irigaray:

How do you propose to think about the sexuality of plants? What is the relevance to human sexuate difference? What I have in mind is the fluidity, pliability, and plasticity of vegetal sexuality, where many plants are hermaphrodites, others can change from masculine to feminine (and vice versa) in their lifetimes, while still others reproduce asexually. Without a doubt, sexuate difference belongs to the phenomenon of embodiment and to life itself. But is it such a linear process, whereby one is recalled to (or one recalls) one’s own sexuate being, as a living body, upon contact with plants? Does the vegetal world open sexuate difference, through which we attempt to encounter it, to sexuate differences that are more diverse still than what Freud referred to as the “polymorphous perversity” of the human infant? (115)

The form of the text, however, recapitulates the logic of sexuate difference (Irigaray and Marder, woman and man), despite Marder’s attempt to call it into question.

Marder’s questions to Irigaray’s focus on sexuate being, however, also shores up the different ways in which each approaches vegetal life. Marder takes a more ontological approach, focusing on vegetal life “as such” as a way of refashioning thought; Irigaray, in contrast, takes a more subjective, ethical approach, as a means of fostering new forms of being. The two are not, of course, mutually exclusive, and Irigaray and Marder share similar experiences with respect to the vegetal world and many of the same concerns.

But Marder in my estimation, comes closer to thinking through vegetal being, in the sense that he attempts to take it as a model for thought and ecologically-based economic, social, and political organization, what he calls “vegetal democracy” (176). Such is the sense of the quotation above, in contradistinction to Irigaray’s focus on sexuate difference, which has the tendency of fashioning vegetal life in a particular image of the human.

Nevertheless, both Irigaray and Marder also discuss vegetal being in deeply personal terms. Both describe the vegetal world, for instance, as a place of refuge, generally and in the midst of specific pressures; in many ways, it seems that both Irigaray and Marder often feel more at home in vegetal environments. The ability to find refuge among vegetal being, however, seems just as much about what one finds there and what one does not find, that is, what one leaves behind: other human beings, and all that goes along with them. Irigaray speaks of recovering her “breath” in the vegetal world, which she considers difficult, if not impossible, for her to do in the city, and Paris in particular (21). Marder likewise speaks of the forest “literally [as] a place of refuge from the heavy pollution, noise, and overcrowding of the city, not to mention of crammed communal apartments” (119).

At times, that personal connection borders on nostalgia, especially for Irigaray. She acknowledges as much herself, (56) but that nostalgia often leads her to make a sharp division between nature and the city and culture more generally. She writes, for instance, that “in nature all that I met followed a truth that sent me back to my truth, whereas in the city all seemed artificially coded” (59). My point is not to cast suspicion on her experience, but to say that its framing fails to recognize the ambiguities that attend relationships to vegetal being.

Marder, it seems, is more attuned to this, both theoretically, in his emphasis on the i 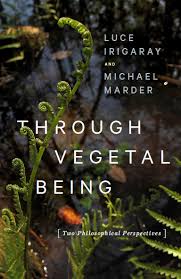 rredeemable difference between plants and humans, and personally (he speaks at length of his seasonal allergies as “symptomatic of everything that does wrong with the human relation to plants” [130]).

Still, this emphasis on the personal is necessary for cultivating new forms of relating to vegetal being and, thus, life itself, precisely because our general disconnect from that world coincides with its objectification, as something (i.e. “nature) set over-against us. Such objectification, as I mentioned above, is part and parcel of our exploitation of nature, but it also ignores the very real and substantial connections between us and our vegetal counterparts. Mapping this connection is one of the strengths of Irigaray’s contribution, particularly in the way she deploys the elements, especially air, as a means of connecting us with the vegetal world (i.e. they are something we both share).

Indeed, more than sharing, we literally depend on the vegetal world for our existence, a relationship that does not always run both ways. Plants, in other words, do not always need us but we always need them. As Marder emphasizes, “We, together with everything that lives, always receive much more from plants than we give back to them, because plants breathe for all animal and human beings without exception” (133). Plants do not, then, merely deserve our respect and care; we owe them, rather, an “unpayable debt.”

Nevertheless, when it comes the relationship between plants and animals, Irigaray seems to demote vegetal being from its otherwise exalted place. For instance, when discussing the importance of sharing together the “fruits of the earth,” she notes that festive meals organized around the consumption of an animal cannot be endowed with the same meaning” (44). This is because the act presupposes “the killing of a living being” (44). In marking the distinction in these terms, however, Irigaray unwittingly excludes vegetal being from life.

My point in bringing this up is not to collapse the difference between plants and animals, as a way to problematize vegetarianism and veganism or cynically promote meat consumption. It is, rather, to suggest that the difference between consuming animals and vegetables should be conceptualized along other lines, since both, in fact, have to do with life.

One might object that this sort of privileging of vegetal life is precisely the problem with the whole idea of what Marder has elsewhere called “plant thinking,” in that it makes developing an ethics sensitive to inviolability different forms of being even more difficult. That may well be the case, but Marder is clear that “there is nothing to suggest that attention to vegetal self-expression and care for plant life are incompatible with attention to and care for other modes of living” (166). The focus on vegetal being, rather, is about developing a wholly ecological way of being in the world (215), a concern that both Marder and Irigaray share.

Notwithstanding the problems mentioned above, the book as a whole, I think, succeeds in this endeavor, at least in an introductory way. Anyone concerned with opening “alternative horizons for relating to the vegetal world, to another human being, and to other humans” (215), then, will find much of value here.

Hollis Phelps is an assistant professor of religion at the University of Mount Olive, in Mount Olive, NC. He is the author of Alain Badiou: Between Theology and Anti-Theology, published by Routledge.

Caputo, John D. The Folly of God: A Theology of the Unconditional. Salem, OR: Polebridge Press, 2016. ISBN-10: 1598151711. Paperback, e-book. 148 pages. What is the interest of theology? Traditionalists will answer that it is interested solely in God, and more specifically, to define and defend the reality of God as supreme being. Much of […]