What is the interest of theology? Traditionalists will answer that it is interested solely in God, and more specifically, to define and defend the reality of God as supreme being. Much of modern evangelical theology has followed this line of thought, fixated on the systematic affirmation of God as one of true omnipotence, omniscience, and omnipresence. God—the one, true God, of course—is self-existent, without beginning or end, and it is the task of theology to articulate the defense for God’s existence. Theology is nothing without God, and God is nothing without theology, at least it appears as such for traditionalists.

Yet, such systematizing leaves more gaps unfilled and more questions unanswered than it does settle the debate over God’s (supposed) existence, at least as supreme being. The question of theodicy is but one glaring example of modern theology’s inability to decisively corroborate the existence of an omnipotent god with the abject presence of evil and suffering. It is in this vein of thought that John D. Caputo presents his thoroughly postmodern argument in The Folly of God for the inexistence of God as supreme being.

Utilizing Derridean deconstruction and a radical reinterpretation of Saint Paul’s words in the first letter to the Corinthian church regarding “the weakness of God,” Caputo makes the case that the interest of theology is not God (as supreme being), but what occurs within the name (of) God, or as he prefers, the “unconditional” (2). Moreover, he contends that this event not only removes God from any category (or necessity) of being, but in turn opens the very possibility of a world transformed through the “folly” of weakness, not supreme might or omnipotent will.

Caputo presents his argument by first distancing himself from the arena of traditional, “strong theology.” He concedes “the high ground to the other side,” contending that “theology has deeper interests than God…and that strong theology has been too strong for its own good” (1). However, instead of directly addressing this “strong” theology, Caputo instead sets his deconstructive sights on the work of Paul Tillich, taking Tillich’s argument for God as the ground of being “to its ultimate conclusion” (8).

It is through this rather indirect approach that Caputo hopes to expose the God of strong theology for the caricature that he/it truly is. Tillich—according to Caputo—did not go far enough, and God needs to be brought down even further in order to reveal and honor the event which occurs in the name of God.

Beginning with Tillich’s claim that any construct used to define God is by its own nature limiting, Caputo follows this train of thought to its eventual end, which is that the very act of defining God and giving God a “definite” name is the act of completely reducing the unconditional to the limits of being. It is an act of dishonor to the very event itself. In other words, by literalizing the symbols we use to describe what occurs in the name of God, we limit God, the event of the unconditional. “The unconditional literally means what has been removed from all limiting conditions” (19). 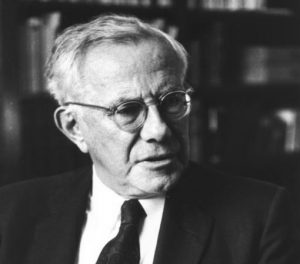 However, later in the text, Caputo argues that, as central to the aims of radical theology as Tillich’s work is, the ground of being is in and of itself, simply a different methodology for maintaining a sense of metaphysical power. Even if one affirms the notion that God is the ground of being—the unconditional in Tillich’s eyes—one must also realize that Tillich’s aim was to reorient the “high theology” of old. The direction of our perspective might change, but it is a theology of power all the same. “Tillich is engaged in a shift from a metaphysics of power on high to a metaphysics of power down below” (68). To Caputo, this is where Tillich’s argument ends, and his deconstruction must go further.

It is here in the book that Caputo makes clear his intentions to take seriously St Paul’s words in 1 Corinthians, that the “folly of God is wiser than humans are and the weakness of God is stronger than humans are” (emphasis added). The central claim of the book thus far is that neither Tillich nor the mystics were able to adequately remove God from the conditions of high/strong theology. Something more elemental, deconstructive, and “unconditional” is necessary if we are to discern what stirs within the name (of) God, though he is careful to emphasize that demonstrating God’s utter non-being is not his intention.

What, then, is a theology of perhaps? Simply put, it is a radical reinterpretation of St Paul’s contention that the weakness of God—the weakness of the unconditional and undeconstructible event which occurs in the name of God—is in and of itself, strength and power, yet without force. Caputo declares, quite forcefully, “The folly of God is that God does not exist. God insists, but God does not exist” (78).

In the wake of decentering God and destabilizing the footing of high/strong theology, Caputo sets the stage for his “theopoetics.” God no longer has any need to exist, but to simply insist. God is now removed from the status or necessity of being, and allowed to remain the unconditional call upon our lives. We must now “pay quiet heed to the phenomenon, to the event, to the unconditional, as maddeningly elusive as it may be” (78). Doing so allows for the theopoetics of the kingdom, the “hoping against hope,” to be our guide, not the incessant debate between theists and atheists over whether God exists or not. 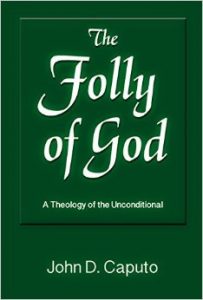 Strong theology, in the eyes of Caputo, cannot adequately answer the reality of the world as such, nor can it prevent us from idolizing our constructs and conditions. Allowing God to remain unconditional—the event within the name (of) God—is our only hope for experiencing the “folly of God,” a world utterly transformed by strength of weakness, a strength without any claim to force. For Caputo, in the same manner, the kingdom of God must undergo the same radical deconstructive interpretation: it is a kingdom without a king, a kingdom of weakness that honors the unconditional call, the folly of God as a God of insistence, not metaphysical existence or status of being. When those who respond to the call of God, the event in the name (of) God, they are transformed (metanoia) in order to actualize the foolish “power” of the weakness of God, seen in self-emptying deference to the Other (cf. Matthew 25:31-46).

This, in my estimation, is the most important effect of Caputo’s deconstruction of strong theology. If traditionalists are correct, and the interest of theology is God alone, then all other “calls” which prey upon our soul are ultimately irrelevant and insignificant to the understanding (and, by proxy, worship) of God as supreme being. Allowing the constructs of literalized names and systematic theologies to dissolve through this deconstruction, in turn, casts our gaze from heaven back to earth, where we are forced to discern and encounter the world as it is, without any ultimate concern as to what God is like (or who God “is”), but whether or not we will respond to this “event,” this unconditional call upon our lives to seek justice, to actualize love in our time and place.

The radical reinterpretation of St Paul’s words in 1 Corinthians is a startling reminder that, perhaps, as I suggested earlier, God as supreme being is nothing without theology—traditionalists need the construct of theology to support the overbearing weight of their “strong” God. For radical theologians such as Caputo, it would be better to remove the construct entirely and direct our sights elsewhere, beyond or beneath God to that which stirs within the name of God.

If we take traditionalists at their word, and concede that nothing is higher than God—the God of supreme omnipotence—then we must travel deeper, to seek out that which lies beneath God (or precedes God) if we are to discern the call of the unconditional as Caputo suggests. Strong, high, or classical theology could never contain nor explain this folly and utter weakness, this search of the depths of God, or what occurs in the name of God, which is what makes it all the more beautiful and desirable.

Caputo’s central argument is that the difference between Tillich and Derrida’s understanding of the unconditional transforms into a “theology of perhaps,” which honors the unconditional, and gives a framework for the theopoetics of the kingdom to take root in the world. In the span of just under 200 pages, he achieves his goal. His addition of “perhaps” to God is a unique manner in which to remove God from the necessity of being, while not in turn limiting God with another construct.

In addition, readers will find the latter chapters, which detail possible “applications” of this “theology of perhaps” within our world, helpful and thought-provoking (Caputo is nothing if not thought-provoking). The book as a whole is a helpful introduction to Caputo’s utilization of Derridean deconstruction, and the benefits of postmodernism to the question of God. Lay readers, as well as students at varying academic levels will find this book engaging, succinct, and well-crafted.

Richard M. Allen is a student at Regent University, pursuing a degree in Theological & Historical Studies. He writes on the intersections of Christian theology, postmodern philosophy, literary theory, and radical politics.

Review – The Contemplative Self after Michel Henry (Michael Saunders)

Rivera, Joseph. The Contemplative Self After Michel Henry: A Phenomenological Theology. Notre Dame: Notre Dame Press, 2015. ISBN-10: 0268040605. 408 pages. Paperback. “Here below, too, life extends its reign. Its concrete modalities are the atemporal substance of our days. Any visible appearance is paired with an invisible reality. With each mouthful of the visible, as Kafka says, an […]

Review – Hear No Evil, See No Evil, Speak No Evil: Negative Reactions to the Jewish Pre- and Post-Holocaust (Madison Tarleton)