In A Theory of Religious Cycles Mikhail Sergeev undertakes the daunting task of establishing a universally applicable framework of religious development.

Coming from communist Russia in which religion was prohibited, Sergeev’s voice distinguishes itself as an outlier standing in the predominant dialogue surrounding the harm caused by religion and its institutionalization by proclaiming religion’s beauty and worth. For example, we have such as the following:  “As a unique human enterprise, religion meets certain needs that no other  [emphasis mine] social institution can adequately satisfy. It provides a sense of morality, duty, community, and meaning to life.”(4) However, he gives little support to these claims, and they manage to alienate and denigrate the non-religious. If expounded upon, these sentiments seem to insinuate that life for the irreligious lacks “morality, duty, community, and meaning…”.

Sergeev’s thesis, not clearly stated until the postscript, are many and varied, which are at least partially to blame for the books falling short of its claims. In 188 pages, Sergeev asserts and attempts to defend six different thesis. Walking through the book thesis by thesis we can ascertain their strengths and weaknesses.

Thesis 1 – “Religion is an organic system and as any organism it develops in quality. It is also a semantic structure, which is based on the interplay between sacred scriptures and sacred tradition whose dynamic correlation provides for the organic growth of the system.” (115)

In his first thesis, Sergeev makes some rather insightful claims regarding religions as organisms. He equates the teachings of religious founders as seeds from when the religion grows. His claims regarding the semantic structure of religion echoes Clifford Geertz’s understanding of religion as a system of symbols, and separates the realms of science of religion, but he never pushes the conversation much past his first chapter.

The first major problem with this thesis arises at his predication of semantic structure upon both texts and traditions. Over 3,000 modern spoken languages have no written component, therefore no written scriptures – they function on tradition alone. Native American spirituality centers on no texts. This conception of religion’s foundation excludes that demographic from the conversation. Additionally, many religions that now have texts developed such texts as a response to colonial influences which lumped subsects of tribal spiritual practice together into one category and needed ways of understanding them/names by which to call them.

Sergeev continues and contends that all religions pass through the same six stages: formative, orthodox, classical, reformist, critical, and post-critical. To Western readers these categories may seem inherently correct, and as Sergeev uses primarily Western religions as his examples, this declaration seems to fit. Again, however, he excludes non-Western religion from a conversation in which he claims to be including all. Were this a theory of Western religion as opposed to a general theory it would stand up significantly better.

Thesis 2 – “Since modernity exerted its influence all over the planet and affected major world religions, it can be characterized as a global crisis of religious consciousness and spirituality. The rise of secularism and the rapid deterioration of traditional morality are among the most dangerous negative results of modernity.” (115)

What Sergeev classifies as a crisis of religious consciousness is the Enlightenment, which he uses throughout his book as a marker for religions (religions being either pre- or post-). While no one argues that a great deal changed for religion in the West as a result of the Enlightenment, calling the rise of secularism and the rapid deterioration of traditional morality as dangerous makes a strong ethics judgement not usual for this type of academic work. Again he seems to be attacking those who do not ascribe to any religious belief.

Sergeev criticizes modernity for what he sees as its persistent moral decline, saying things such as “Religion is the soil in which the seeds of morality grow into the flowers of human righteousness” (47). Like those who seek to “Make America Great Again”, Sergeev glorifies the past as somehow being more ethical than the present, and he attributes that difference to the death of religion. He suggests the only solution for the “systemic crisis” of spirituality and religion is that new religions must arise with their own revelatory texts – which is why he chose Baha’i as his exemplar for modern religion.

Thesis 3 – “Culture originates in religion and entails a set of beliefs that operate from within the individual. Civilization consists of rules that regulate the external behaviour of individuals in society.” (116)

Suggesting culture originates in any one place is highly reductive. Culture entails language, religion, food, dress, and many many other factors. To equate the complex entity that is culture to only one factor lacks the breadth of scope an all-encompassing theory of religion needs.

This third thesis functionally bridges the divide between the first and second parts of the book. Part one of the book 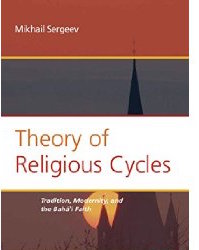 Thesis 4 – “The Baha’i ideology in many significant ways represents an extension of the modern worldview.” (116)

Thesis 5 – “There are a number of Baha’i doctrines that are either incompatible with or represent an apparent step backward from the Enlightenment worldview.” (116)

Both theories 4 and 5 are seemingly true on their own. Sergeev makes his points well, giving a brief history of Baha’i, but these thesis seem to conflict with one another because of this insistence on framing the conversation with the Enlightenment. Centering the dialogue around the Enlightenment, Sergeev essentially says that Baha’i is both modern and ancient – a product of the Enlightenment and a step back from it.

Thesis 6 – “Formally speaking, religion can never be fully separated from the states because both of those institutions serve the same purpose of human education and training in virtue… historically though, the principle of the separation of church and state was formulated and put into practice in order to free religions from state control…” (117)

This final thesis is, in essence, his final chapter. Contradicting earlier claims of religion as the only source of morality, Sergeev allows for morality in governmental policy, but distinguishes between the two. While it continues the Baha’i conversation, stemming from their eventual intended theocracy, the thesis as a stand alone seems out of place.  Entire books could be and have been written on the relationship between religion and politics, and aside from enlightening the reader of the Baha’i conception of religion and politics, nothing new theoretically is proposed here.

The overarching concepts of Sergeev’s theory are good: religions as organisms which grow and change over time, systemic and structural crisis that serves as a catalyst for change, etc. And his descriptions of the Baha’i are well written, well researched, and informative. This book is, functionally, two books. Part one delves into Sergeev’s religious theory, and part two is an intriguing study into the Baha’i. The content would be better served if presented separately.

Additionally, while the core concepts are good, when it comes to the particulars Sergeev grinds an axe against secularism, understandably considering his context, but it colours his argument in a non-beneficial manner. He attempts to accomplish far too many things in far too few pages, posits a universal theory that seems centered around Western conceptions and practice of religion, and seems ignorant of the harm wrought by religion as a whole.

Overall, this is not a book I would recommend for serious use as a theoretical text,  but as a chronicle of the Baha’i faith it has decent potential.

Rebekah Gordon is a graduate in the Religious Studies department at the University of Denver. She is a poet and a musician in addition to an academic, and is an editor for the e-mag Esthesis as well as an assistant editor for The Journal for Cultural and Religious Theory. Her interests range from secular-sacred relations in America to religious fiction, semiotics, and redemption theology.

Nail, Thomas. The Figure of the Migrant. Stanford: Stanford University Press, 2015. ISBN-10: 0804796580. 312 pages. If the 21st century is indeed the century of the migrant, then Thomas Nail’s work is a timely consideration of this oft-neglected shadow of human civilization. To be precise, Nail argues for the necessity of this figure throughout terrestrial […]