Azzan Yadin-Israel’s The Grace of God and the Grace of Man: The Theologies of Bruce Springsteen explores the theological development of Bruce Springsteen’s songs. Yadin-Israel’s book follows an increased critical interest in the religious dimensions of Springsteen’s songs during the last decade. Arguably, the most important theologian to consider Springsteen’s work is Andrew Greeley, who, in The Catholic Imagination, argues persuasively that a Catholic worldview informs Springsteen’s lyrics. Likewise, in “The Gospel According to Bruce,” Jerry H. Gill, examining Springsteen’s lyrics as parables, argues that the songs do not necessarily contain explicit references to God, but the songs speak to encounters of divine love and grace within a contemporary context. The critical conversation surrounding Springsteen shows no signs of slowing down with the establishment of BOSS: The Bi-Annual Journal of Springsteen Studies in 2014.

The first chapter, “The Sacred Profaned,” examines Springsteen’s critiques of established religious institutions. For example, “Saint Theresa,” one of Springsteen’s early unreleased songs, is a “love song (lust song) to a nun,” seemingly countering “the Church’s traditional priority of the Spirit over the flesh (34, 35). Springsteen’s critiques become even stronger in his 1972 album Greetings from Asbury Park, N.J as he plays with and reworks traditional Christian themes and figures. In the unreleased song “If I Was the Priest,” Springsteen recasts Mary as “junkie and a boozer, and a terrible prostitute to boot” (48) rather than as a holy virgin. Yadin-Israel suggests that these reconstructions function in two ways: first, they represent a “form of rebellion,” a move away from the Catholic tradition, and second, as Yadin-Israel explores in the next chapter, “it clears the way for a non-traditional, immanent path to redemption” (49).

The next chapter “The Profane Sanctified” further explores how Springsteen sets up this alternative system for redemption. Springsteen’s songs do not completely reject religion or spirituality; rather, they point to grace and redemption within the world through physical intimacy. “Spirit in the Night,” for example, collapses the boundary between the physical and spiritual realms by aligning a couple’s erotic love with redemption: “Their nakedness has been transformed into a redemptive force; they are naked and crying out like newborns, having recovered the innocence of Eden on the shores of Greasy Lake” (52). Among the world objects or symbols that offer redemption is the open road. As previous critics have noted, “Thunder Road,” “Night” and “Born to Run” emphasize the spiritual power of driving on the open road, because it offers spiritual escape from the confining city.

In “Toward the Apocalypse,” Yadin-Israel suggests that Springsteen’s album Darkness on the Edge of Town dismantles and “critiques the salvific claims of Born to Run and offers an alternative religious paradigm—that of the apocalypse” (65). Darkness of the Edge of Town rejects cars as redemptive and instead presents car crashes, and the album calls into question the belief that romantic relationships can redeem humanity. The album’s images of storms suggest the presence of a new apocalyptic reality, but this new reality revolves around violence, humans’ powerlessness, and an indifferent world.

Moving away from a chronological approach to a thematic focus, the next three chapters examine how Springsteen reworks traditional theological categories (sin, grace, and internal struggle). Yadin-Israel argues that, in general, Springsteen conceives of sin “as the process by which decent individuals confronted with difficult circumstances, lose touch with their better selves” (85-86). Chapter five, “Grace and Redemption” traces Springsteen’s view of “grace as an immanent event, a redemptive experience embedded in the lived reality of everyday life” (102). “The Struggle Within” explores how Springsteen’s characters navigate right and wrong action. According to Yadin-Israel, some of Springsteen’s songs depict humans as composed of “both good and evil forces,” while other songs locate innately good characters in difficult situations or systems (133). 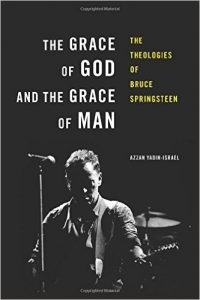 Yadin-Israel closes his book by reading Springsteen’s songs as Midrash. The final chapter, “Springsteen’s Midrash” focuses on how Springsteen reworks the narratives of Cain and Abel, Jonah, Elijah and Elisha, and Jesus and Mary. For example, Springsteen’s “Jesus Was an Only Son” reimagines the Passion narrative and draws explicit attention to the human—rather than divine—life of Jesus by emphasizing “Jesus’ humanity, Mary’s constant maternal presence, and God’s paternal absence” (178). As modern American Midrash, Springsteen’s songs attempt to fill in the gaps of the biblical narratives, and, in the process, they draw attention to new ways to read the Bible.

Yadin-Israel’s study of Springsteen is engaging, intellectually-stimulating, and clear. Fans of “The Boss,” casual readers, and scholars of American religion, literature, and culture will find this book convincing and worthwhile. Yadin-Israel offers a wide-ranging reading of the various theological strands in Springsteen’s songs, but he carefully presents his argument in a clear and accessible manner. I strongly recommend Yadin-Israel’s The Grace of God and the Grace of Man: The Theologies of Bruce Springsteen.

James Cochran, a third-year doctoral student in the English department (in the Religion and Literature program) at Baylor University. My research centers on twentieth-century and contemporary religion, literature, culture.

Giorgio Agamben. What is Real? Trans. Lorenzo Chiesa. Stanford: Stanford University Press, 2018. 88 pages. ISBN: 978-1-5036-0737-8 Every mysterious disappearance assumes mythical tones, the subsequent fate of the missing person remaining indefinitely suspended when concrete and sufficient information is lacking: perhaps a second life somewhere far away, under an identity as new as false, as […]

Note:  This review is also published simultaneously in the PDF special issue of JCRT 16.1. Butler, Judith. Senses of the Subject.  New York: Fordham University Press, 2015. ISBN-10: 082326467X. Paperback. 228 Pages. Despite having appeared separately in journals or as chapters in other books over the last twenty years, the essays collected in Judith Butler’s Senses […]