Distinct connections between political economy and ontology may seem to some as unnecessarily abstract. What, after all, does a sufficient understanding of ontology provide for possible conceptualizations of political economy, let alone a practical politics, especially one that results in a “rethinking of community in our globalized world” (p. 1)? We can acknowledge the possible cruciality of basic philosophical considerations for viable political emphases. But, in this case, the question is so much more vital because the considerations of a possible coming politics, through a rethinking of community, rely on ontological considerations of the proper, and in this case the dialectic of alienation and appropriation, which entered crucial debate in the 90s.

While the question of rethinking the commons remains as important as ever, Greg Bird points out an essential wrestling with the concept of appropriation and the larger problem of the proper in political philosophy that can be found in the broader corpus of three central, interconnected thinkers: Jean-Luc Nancy, Roberto Esposito, and Giorgio Agamben.

Bird focuses particularly on a specific shared time period wherein these three located the pervasive issue in the dispositif of the proper (as found, specifically, in Heidegger), noted the importance of breaking from the various instantiations of the proper, and acknowledged political experimentation through extended discourse on community. The late 80s and the majority of the 90s were a period of extended production of materials detailing the main issues of community through both ontological work and theorizing political economy, with the 90s being a moment of a shared second debate on community. Although the book, Containing Community, predominately focuses on a stage in thought shared among these three scholars, Bird is able to activate this period as an essential stage within their broader corpus (pp. 1-2).

These thinkers’ core issues surround a dispositif of the proper (p. 6), possible political community, and ontology. In this sense, going beyond simply a hyper-focused take, Bird is able to adequately provide a strong introduction to the broad trajectory of Nancy’s, Esposito’s, and Agamben’s work, despite noting that the book is “not an introductory text that provides a . . . summary of the debate” (p. 1). But, perhaps at this stage it would be helpful to note a general outline of the volume, pointing to the conceptual issues at stake, but also the divergent themes as they emerge in discussions on the various thinkers’ work.

Containing Community, while divided into five chapters, could be seen as being comprised of two major sections. The initial section contains only two chapters, but these are essential for setting up the later analysis of Esposito, Agamben, 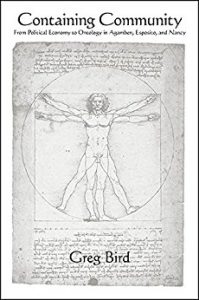 and Nancy. Bird’s first chapter, “Political Economy and the Proper,” grounds the rest of the volume, drawing out the grave issue of appropriation and the pervasiveness of the proper in political economy and beyond which forms how we conceive of politics, community, and the subject (p. 3, 6). This can be seen in the general divisions between Marxist and anarchic thinkers, both attempting to dismantle political economic ideologies.

All three philosophers, however, would oppose the political prescription of “combin[ing] economic appropriation with political appropriation (i.e., the state must be seized along with the factories)” (p. 7), something which they have been criticized for. Eschewing appropriation, and re-appropriation, is generated precisely through noting those practices as “nothing more than an ideological defense of the proper” (p. 7). The chapter spends some time tracing a general genealogy of the proper, underscoring Locke as a thinker who, according to Arendt, “extended property to the personal,” creating a long lasting issue in political thought, namely the conflation of the economic and political (pp. 10, 11).

In setting up a corrective for this problem, Bird spends substantive time on various critiques of Locke’s Homo approprians through Marx, Proudhon, C. B. Macpherson, and Etienne Balibar (pp. 11; 12-17, 18-21). These different critiques of Locke name a common confusion, but we find in Agamben, Nancy, and Esposito a shared conclusion from this pervasive issue: “because the dispositif of the proper creates a series of enclosures, it prevents us from thinking about relationships and thus community” (pp. 21-22). And, the predominant way this occurs is through a “dialectic of alienation and appropriation” that names community as a “thing” which must be appropriated in individual ways by subjects (p. 22).

This causes difficulties with conceiving of community, because while appropriation is a shared activity, it amounts to a mere “division without sharing” and may “absorb and nullify the division that defines our commonality” (p. 23). And, furthermore, these philosophers wonder how each participant can “appropriate the community without annihilating it,” or ending up absorbed into the community (p. 23).

As Bird points out, neither of these are “relational conditions”; neither a sort of “social contract tradition (division without sharing)” nor a community that absorbs subjects (sharing without division) can sidestep the earlier confusion (p. 24). While the last three chapters are engagements with Agamben, Esposito, and Nancy to see if these primary issues with community can be solved through reconception, Bird spends his second chapter focusing on Heidegger’s elaboration of the dispositif of the proper.

Bird specifies Heidegger as an interlocutor for this pre-emptive chapter because not only was he attempting to “reconfigure how ontological philosophy was conceptualized within the semantics of the proper, property, propriety, and even authenticity” but also because he appears heavily in each of the main philosophers’ works, especially in his modes of formulating and addressing the proper (p. 37). For Nancy, Heidegger’s being-with is a main touchstone for his own re-thinking of community, but his early work focused on Heidegger’s being-toward-death, something later dropped from Nancy’s writing (p. 39). While this chapter is essential for the project, much of Bird’s discussion here can seem tedious, traversing Heidegger’s corpus and noting how certain specific concepts have been used in Heidegger’s corpus in nuanced ways to rethink problems of togetherness, properness, the improper, and being-toward-death.

The next major section is an explication and investigation of the main three philosopher’s conceptions of community, and how they deal with the problems elucidated above. Bird begins with Nancy in a chapter titled “The Existential Community.” Again, while Bird notes that he is mainly interested in the work done in the 90s, and here specifically Nancy’s Being Singular Plural, he takes great pains to utilize the full corpus of Nancy’ work, even dividing this chapter into three sub-sections that recount Nancy’s work done in the 80s, 90s, and 2000s.

Noting these stages, however, displays the fuller arc of Nancy’s work, a body of writing that has often been brushed aside as “nothing more than ornate and politically vacuous,” written by someone “abandoning politics while favoring the ontological” (p. 63). Bird notes, however, that despite these common critiques, Nancy is participating in a weak politics, and that his broader project is to “carefully articulate a delicate relationship between existence and politics” (p. 64). Like Agamben, Nancy is concerned with the appropriation of existence by the political. While this is an important part of Nancy’s work for Bird, his main focus is on underscoring the dialectic of “the proper and the problem of belonging-together” (p. 65).

Bird details the Agamben’s work, which represents a sort of exaggeration of Nancy’s weak politics (p. 105), in the fourth chapter, noting the important ontological connections, but also the differentiated form his politics takes. While he draws from Nancy, and is charged with impracticality as well (p. 105), he shifts his critique of the proper through a “systematic critique of the productive paradigm that animates how we conceive of both ontology and politics” (p. 105). This seems to be the crux of Agamben’s examination of community, a re-thinking of potentiality that morphs a sustained fixation on work that becomes too close to essentializing the subject (pp. 112-17).

Again, as with Nancy, Bird takes the reader down the majority of Agamben’s writings, noting the various shifts (to biopolitics after The Coming Community, for instance) and broad themes that are found in the various periods of Agamben’s writings. The focus is, of course, “community,” and he makes clear the connections between Agamben’s and Nancy’s work, while also noting the importance of political movements, post-Heideggerian thought, and our current biopolitical era.

Bird’s final main chapter centers on another Italian thinker of the biopolitical, Esposito, who published a ground-breaking book on community in the 90s, Communitas. Interestingly, here we see a sort of chiastic shape take place. From weak politics (Nancy), to an exaggerated form of withdrawal (Agamben), to a more concrete (though, still “weak” in form) political orientation (Esposito). Communitas is concerned with the ontological, and spends time traversing the breadth of western thought on the common, but doing so through “the Heideggerian critique of the dispositif of the proper,” (p. 151-52) something common to the other philosophers. Separating his work from Agamben’s and Nancy’s is Esposito’s merging of the ontological and the ethical, something Nancy and Agamben would not do as boldly. Esposito’s communitas takes place around an ethical economy of the munus in which “the proprietary disposition of Homo approprians is radically expropriated” (p. 152).

Bird points to the public correspondence between Nancy and Esposito that helps identify the similarities and contrasts, underscoring the Heideggerian connection and also the more obvious political declension of Esposito’s work (p. 153-55). Bird spends much of the rest of the chapter detailing Esposito’s notion of communitas, which primarily takes the form of a deontological community based on his etymological work on the term, work that mirrors the other two philosophers by eschewing the usual fixation on “having” community, as if it is a thing or property (p. 156).

Instead of “having,” with the munus (“gift” in community) “members share ‘an expropriation of their own essence’” that alters their being subjects (p. 163). Bird also makes clear in this chapter the differences between Agamben and Esposito, noting for instance a reading of Agamben as failing to properly break from the “improper”, which leads to certain political weaknesses exposed by Esposito’s work (p. 189).

Bird concludes the book reiterating the importance of wrestling with the dispositif of the proper, a dispositif that is present in some of the most challenging issues today that render us unable to “live and exist in common” (p. 194).

And, in fact, through detailing the work of each of the philosophers, Bird has sought to unearth the importance of noting the dispositif of the proper as a central place of engagement in thinking about how to transform how humans live together, and not simply “another Heideggerian neologism” (p. 195).

Ultimately, Bird succeeds in bringing together these three philosophers in order to emphasize the shared issue of the dispositif of the proper, and how noting this problem helps conceive of the difficulties and possible solutions of community. Bird demonstrates his expertise through his use of a diverse range of materials throughout the book, though it has to be admitted that at times there appears to be a disconnected, bloated feel to the book. This is most likely due to the disparate nature of the sources.

Despite the problem of scope, Bird is, however, able to bring in the various philosophers at key points, noting how their divergent attitudes to ontology and ethics play off one another, or noting the different strategies for dealing with the dispositif of the proper.

In the end, Bird is able to put a name to a global problem, pulling forth Heidegger’s thought and noting how each philosopher contends with the proper and attempts to deconstruct it in various ways so as to point to community, and perhaps a coming politics.

Nail, Thomas. The Figure of the Migrant. Stanford: Stanford University Press, 2015. ISBN-10: 0804796580. 312 pages. If the 21st century is indeed the century of the migrant, then Thomas Nail’s work is a timely consideration of this oft-neglected shadow of human civilization. To be precise, Nail argues for the necessity of this figure throughout terrestrial […]